However, mRNA and protein levels are not always correlated in mammalian cells. Indeed, the regulation of protein synthesis is the end point of several signaling pathways, providing a rapid adjustment of gene expression to environmental changes. Moreover, the deregulation of protein synthesis in pancreatic cancer has been widely described, demonstrating its role in the initiation and development of this cancer. Consequently, translatome analysis (genome-wide analysis of translated mRNAs) of PDAC tumors provides a better pProxi of actual protein abundance because it encompasses environmental modifications and stresses.

In particular, our team’s work has identified the loss of the translational repressor 4E-BP1 in pancreatic cancer cells and its functional consequences (Muller JCI Insight 2019), as well as the activation of protein synthesis in CAFs (Duluc EMBO Mol Med 2015).

Our most recent work has identified, through translatome analysis of PDX (patient-derived xenograft) PDAC tumors, a novel subtype named “ISR-activated” exhibiting a particular translational deregulation of a subset of mRNAs involved in the integrated stress response, ISR (including ATF4). ISR-activated PDX-derived cancer cells are refractory to most chemotherapeutic agents and apoptosis, but depend on exogenous serine for growth. Thus, the growth of these ISR-activated tumors relies on the metabolic support in amino acids provided by its stroma and in particular CAFs (Shin, BioRxiv 2020).

Our current work is interested in understanding the metabolic symbiosis between the stroma and the “ISR-activated” tumor cells, by characterizing on the one hand, the metabolic exchanges tumor/stroma and on the other hand, by developing bioinformatics analyses (deconvolution) of the translated RNAs of the tumor microenvironment. 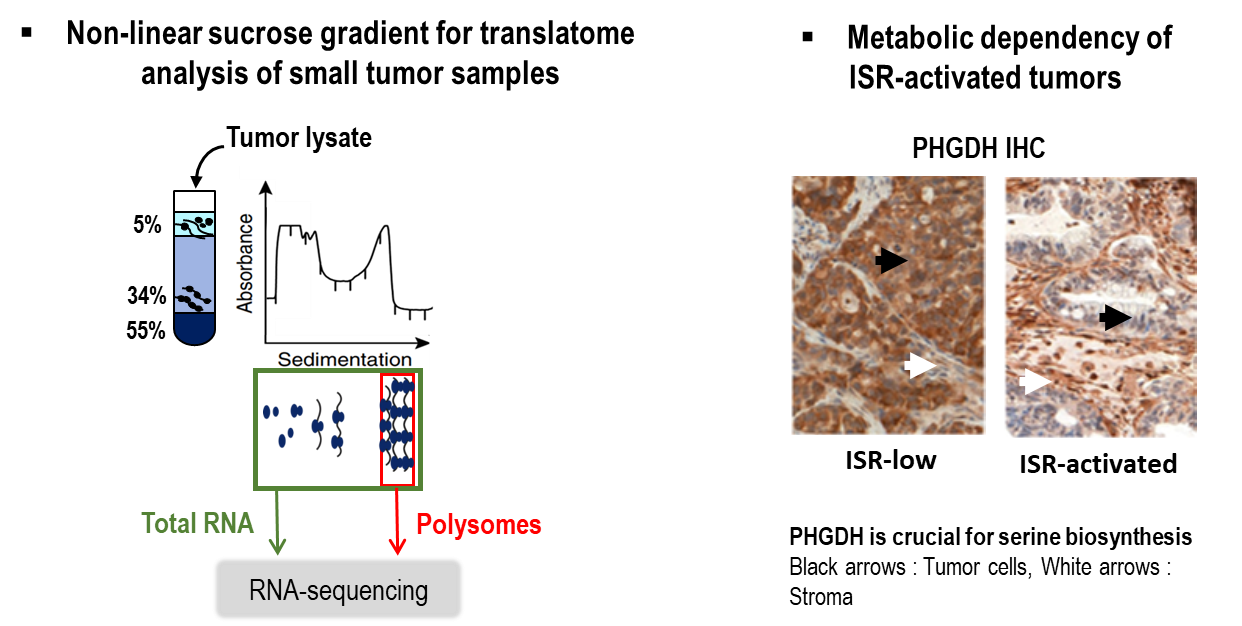