More than just a crosstalk

More than just a crosstalk, histone marks can be drivers of the changes in splicing observed during the epithelial-to-mesenchymal transition

Histone marks have long been suggested to play a role in the regulation of alternative splicing. From such studies, the impact of chromatin in splicing seemed limited, affecting just a small number of exons, and in a modulatory way by just fine-tuning the final splicing outcome. By combining genome-wide transcriptomics and epigenomics machine learning analyses, we have found that chromatin modifications can differentially mark a third of all the alternatively spliced cassette exons expressed in human embryonic stem cells in a combinatorial and position-dependent way, creating what we called Splicing-Associated Chromatin Signatures (SACS). These SACS coordinate the splicing of functionally related genes sharing common RNA binding motifs to an extent that changes in splicing between human cell types correlate with changes in the enrichment of these SACS. Even more, a highly localized change in a single histone mark right at the exon of interest, using CRISPR epigenetic editing tools, is sufficient to induce a change in splicing that can recapitulate the epithelial-to-mesenchymal transition. Taken together, we have evidence of the dynamic role of histone marks in driving the alternative splicing of subset of genes with specific functional and/or regulatory characteristics that could be reverted in a therapeutic context, like for inhibiting EMT-dependent cancer metastasis. 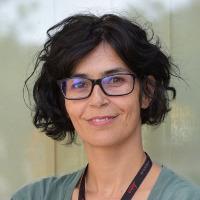