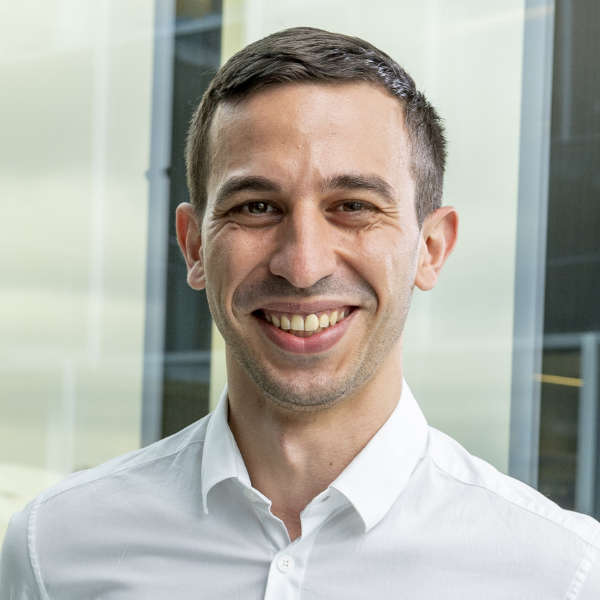 Acute myeloid leukemia are therapy-resistant aggressive cancer types, affecting bone marrow cells, which are the source of most blood cells. The patient life expectancy with this cancer is very low due to the frequent relapses observed following treatment.
Our work has identified CALCRL cellular receptor as a poor prognosis factor in patients who express it strongly. We showed that the cell population expressing this receptor is involved in patient relapse, by allowing treatment resistance as well as disease redevelopment. Functionally, CALCRL participates in the inflammatory response and the energy capacity of these cells. It seems that this population preexists at diagnosis and is predominant after chemotherapy, which therefore makes it a major target for both patient diagnosis, as well as residual disease elimination after treatment.

In recent years, new therapeutic weapons against acute myeloid leukaemia (AML) have emerged, promising to radically improve the vital prognosis of these patients. Nevertheless, despite the arrival of these new molecules, relapses remain frequent. Understanding the chemoresistant leukemic stem cells (LSCs) that cause relapse is therefore a crucial issue in the fight against the disease. Our team has previously demonstrated that in vivo, the phenotype of these cells is heterogeneous and that they are not necessarily enriched in residual disease after chemotherapy, but that a subpopulation of resistant LSCs persists and allows leukemic redevelopment.

In early work, we identified by in sillico analysis the CALCRL gene as overexpressed at relapse, in LSC, and of poor prognosis in AML. We were able to show that invalidation of the CALCRL receptor affected leukaemic development and survival in vitro and in vivo. We also identified its ligand, adrenomedullin (ADM), as involved in leukaemic progression. Specifically, in vivo clonogenic and limiting dilution (LD) experiments showed that CALCRL is involved in leukaemic stem function. We also showed that this receptor regulates the cell cycle via the transcription factor E2F1 and contributes to cell survival by regulating the pro-apoptotic factor BCL2 as well as through DNA damage repair. Finally, CALCRL invalidation sensitises to conventional chemotherapy in vitro and in vivo. Thus, we identified the CALCRL receptor as a new marker for chemoresistant LSCs.

In a second study, we wanted to better understand the functions of CALCRL by directly characterizing the cell population expressing this receptor (CALCRLHigh) in AML patients. To this end, we sorted the primary population expressing CALCRL High and the CALCRL Low population in the same patient at diagnosis. First, we demonstrated that the RAMP2 co-receptor is well expressed in AML patients, despite data from the literature suggesting otherwise. Its invalidation also mimics the anti-leukaemic effect observed by invalidating CALCRL, suggesting that the ADM/CALCRL/RAMP2 axis is involved in leukaemic progression. Furthermore, we have shown through in vivo LD and long-term in vitro culture experiments that the primary CALCRL High population is functionally enriched in stem cells, as well as phenotypically enriched by stem cell markers such as CD123, compared to the CALCRL Low population. This population also appears to have an age-related inflammatory profile and is engaged in differentiation via a pseudosenescence phenotype. This population also has a very high energy and oxidative metabolism. In particular, we have shown that the transcript factors ATF4 and ETS2 are overexpressed in primary CALCRL High cells. Finally, in order to target this population, we screened more than 80 treatments and analysed the sensitivity of lines invalidated for the CALCRL receptor. We show that 17 of these treatments sensitise these lines and are promising combinations to a CALCRL blocking treatment.

The CALCRL High population thus characterises an inflammatory stem population that will pre-exist at diagnosis and be overexpressed at residual disease. Targeting these cells therefore appears to be a very promising way to combat relapse in AML.