We analyze the architecture and dynamics of lytic synapses formed at the site of contact between cytotoxic T lymphocytes (CTL) and tumor target cells. We have recently shown that CTL-mediated cytotoxicity is composed of two phases: (i) a very rapid killing phase that occurs within seconds after target cell contact and formation of the immunological synapse; (ii) a late and sustained killing phase allowing a few CTLs to emerge as super-killers capable of annihilating multiple target cells; (iii) in this second phase, T cells behave very heterogeneously with respect to their ability to kill target cells, and this heterogeneity is generated, at least in part, by asymmetrical division mechanisms (Fig. 1). 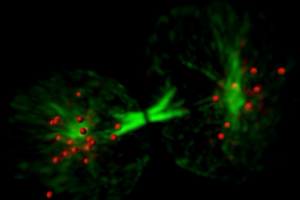 IV) We have also shown that in the late phase of interaction with target cells, CTLs release SMAPs (Supra Molecular Attack Particles) which are a kind of lytic bombs released by CTLs to kill target cells at a distance (S. Balint et al. Science 2020, Fig. 2). 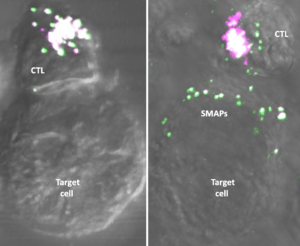 V) Our work also shows that clinically aggressive cancers such as melanoma protect themselves from CTL attack by deploying defense mechanisms at the synapse that neutralize CTL attack (Fig 3).

Figure 3: Lysosomes of melanoma cells are enriched at the lytic synapse.
Melanoma cells expressing CD107a-GFP were filmed during their interaction with two specific CTLs. The pictures show the localization of the CD107a-GFP+ compartment before and after conjugation with two CTL cells. The fluorescence intensity is shown in a false color scale. (R. Khazen et al, Nat Com 2016).

Our current goal is to further our understanding of the sophisticated balance between CTL efficacy and tumor cell resistance at the lytic synapse and to discover novel CTL-based immunotherapy strategies that can improve the efficacy of the antitumor response in cancer patients. To develop this research, the team, in collaboration with colleagues based in the UK, Germany and Italy, has been awarded a prestigious ERC Synergy Grant. The objective is to explore completely new ways to develop cancer treatments.  The research will be developed in close collaboration with clinicians from the IUCT and the Toulouse University Hospital.