I) We have generated an agent-based model describing the tumor nodule/CTL confrontation (Fig. 4). This model integrates the biological background of immunologists in the team with the skills of computer scientists. Our process of modelling is highly integrated with experimental biologists included in the whole modeling process.

Moreover, the model is calibrated on experimental data specifically generated by the team. It is thus a unique tool to explore in detail the complex competitive interactions between human CTLs and tumor target cells (Figure 1). 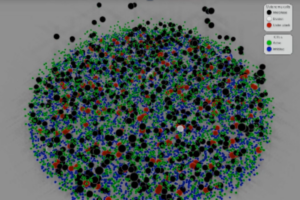 Our goal is to develop new optimization tools capable of generating more efficient experimental protocols that will then be evaluated in the laboratory. This will allow us to define the best scenarios in which the balance between CTL efficacy and target cell resistance can be altered in favor of CTL efficacy.

II) We have developed an image analysis pipeline generator using genetic programming (GP, a computational approach inspired by Darwinian evolution to automatically generate computer programs). The pipeline generator will be used for the segmentation of microscopic images acquired by the team. It will be used to quantify, in an automated and non-subjective way, the multiple “features” detected in images under various experimental conditions. Unlike classical machine learning approaches, GP is expected to require a very limited amount of data to produce an effective analysis pipeline, making this artificial intelligence tool ideally suited to the context of experimental biology.